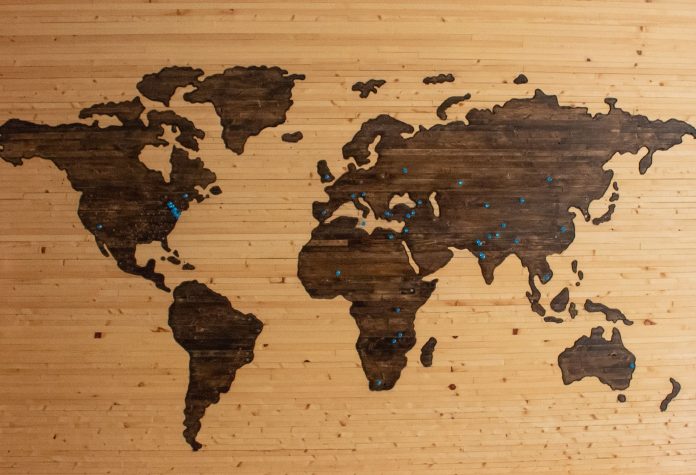 Do you think that people in your country drink the most coffee?

We are all wondering which country, which nation drinks the most coffee. Coffee consumption is something that can determine which nation is the greatest coffee geek in the world, let it be a cappuccino, French press, or a cold brew coffee for those hot summer evenings. Of course, it does not represent the individuals who prefer quality to quantity. You would think that it must be one of the big nations. Like the USA, Canada, Russia perhaps. Surely they come in in TOP5. So should countries like Brazil or Turkey, right? Not really!

So, which nations drink the most coffee?

Iceland follows Norway (the second largest consuming country per capita) with 9.0 kg per capita and Denmark with 8.7 kg. In other reports, the Netherlands contributed to this top with 8.4 kg per capita. Still, it is not included in this one again (and the data is available only for the years 2017/18), for the same reason – not consuming enough to appear in the overall report. But it is worth mentioning, as it does consume a lot of caffeine.

It might seem a surprise to see that the top 2 positions are occupied by such (relatively) small countries as Finland (5.5million people), and Norway (5.3 million people). At least when you compare to America, Russia, Brazil, and other bigger countries. Why so?

Finland is home to only around 5.5 million people. Yet, it is one of the top coffee consuming countries in the world, along with other Scandinavian countries – Norway (5.2 million people) and Iceland. 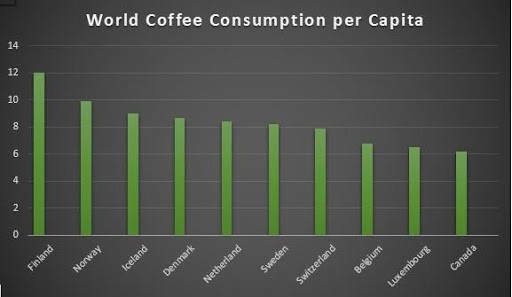 What about the big countries?

As you can see – big countries like France, the USA and Canada are not at the top. Although they consume way more coffee than the smaller ones (like Switzerland, Norway, or Sweden), there are a lot more people living there. Therefore, the average consumption per capita is lower, as the total amount of coffee has to be divided with more people.

We will be following the reports published by EUROMONITOR INTERNATIONAL rather than the US Department of Agriculture. That’s because the Euromonitor report assesses all the coffee consuming countries rather than a few with a specific minimum amount of total consumption.

It may be quite a surprise to you that Finland, whose culture isn’t recognized for its coffee worldwide, consumes the most coffee. Mind you, coffee is deeply rooted in the Finnish culture, and there is a coffee type called Finnish coffee. Well, we can easily say that this trend most likely originated because of the extreme cold in Finland, with temperatures getting to -400 in its Northern part. So, a hot, tasty and flavourful cup of joe would be very much irresistible.

Finns, unlike most nationalities, prefer very light roast coffee- a bit lighter than the standard light roast available elsewhere. Interestingly, almost 80% of the coffee consumed in Finland is very light roasted, and only in the past ten years did Finns start to get a little accustomed to a darker roast. Finally, here’s a mind-boggling fact about Finns and their love for coffee. Some collective labor agreement in Finland states that there should be two 15 minutes of coffee breaks in a workday☺.

Norway is second place and one of the leading countries for per capita coffee consumption, with over 80% of its population drinking about 4/5 cups of coffee per day- so amazing, right? The reason for that? More amazing!  In the mid-1800s, alcohol wash prohibited in Norway, and its prices, as well as scarcity, increased. Coffee arrived in Norway in the early eighteenth century, too, and was enjoyed by the wealthy at first. Later it became quite cheap. So, this hot brown drink became a social drink picked by most people- being more affordable, more delicious, and a darling in the cold temperatures of Norway.

Iceland, like Norway, banned alcohol sales over 100 years, beer wasn’t really a thing for Icelanders because Iceland struggled with Denmark and Icelanders associated beer with Danish culture. However, we cannot say that its love for coffee- consuming a mouth-watering 9.0kg per capita. Coffee arrived in Iceland in November 1703 when Arni Magnusson- a scholar and collector of valuable Nordic Manuscripts, bought a quarter pound of coffee from Denmark. A century and a few years later, the amount of coffee imported into Iceland went up from 5 tons per year to 213 tons per year.

What’s more surprising is that Iceland sits as the world’s third coffee-consuming country. Yet, there isn’t a single Starbuck in the country- so weird! Well, the country is quite small and local, smaller cafés are most available and preferred by Icelanders. Small, local cafés aren’t much of a bad option. Besides, it increases the competition among cafés; if a place offers high-quality coffee, the others have to do better. So, you can be sure of a very toothsome cup of coffee as well as excellent hospitality in any café. Still, there are two pretty big cafés names in the country- Te og Kaffi and Kaffitar.

Like other Scandinavian countries, Denmark is a predominately coffee drinking nation with tradition deeply rooted in this toothsome beverage. As a custom, coffee is served at each meal here. It’s even more of a focus on special occasions, usually served with cakes, sandwiches or cookies.

The Danish coffee ranks as one of the most expensive coffees in the world (precisely, sixth). However, there are cheaper options anyone can buy.

There are various Do’s and Don’ts in the Netherland. Do keep an eye out for those cyclists. Don’t take pictures of ladies in Amsterdam Red Light District. And most importantly, try out the “Koffie.” Well, you’ve got to be careful while trying out those coffee shops because many serve coffee but serve marijuana too. So, Amsterdam is considering banning tourists from these infamous cannabis-vending coffee shops.

Dutch, in 1616, is the first European country to obtain live coffee trees. These trees were brought from Mocha, Yemen, by Pieter Van Den Broecke. In no time, the country moved from a small cultivator of java to one of the top suppliers of coffee in Europe.  On average, the Dutch will drink 2.4 cups of coffee daily, served with cakes or cookies.

Some interesting facts about coffee

If you wish to learn some history about coffee, and to know which are the Top 5 countries regarding coffee production, check this article. And, if you are interested to learn what side effects caffeine can cause and what products contain caffeine, read this article on negative side effects of caffeine.

Olivierhttps://coffeforus.com
Coffee marks an excellent start of the day, enjoy it!

6 Ways to be a More Eco-Conscious Coffee Drinker